Readings from the Scriptures (CEB) Luke 1:5-24a

5 During the rule of King Herod of Judea there was a priest named Zechariah who belonged to the priestly division of Abijah. His wife Elizabeth was a descendant of Aaron. 6 They were both righteous before God, blameless in their observance of all the Lord’s commandments and regulations. 7 They had no children because Elizabeth was unable to become pregnant and they both were very old. 8 One day Zechariah was serving as a priest before God because his priestly division was on duty. 9 Following the customs of priestly service, he was chosen by lottery to go into the Lord’s sanctuary and burn incense. 10 All the people who gathered to worship were praying outside during this hour of incense offering. 11 An angel from the Lord appeared to him, standing to the right of the altar of incense. 12 When Zechariah saw the angel, he was startled and overcome with fear.  13 The angel said, “Don’t be afraid, Zechariah. Your prayers have been heard. Your wife Elizabeth will give birth to your son and you must name him John. 14 He will be a joy and delight to you, and many people will rejoice at his birth, 15 for he will be great in the Lord’s eyes. He must not drink wine and liquor. He will be filled with the Holy Spirit even before his birth. 16 He will bring many Israelites back to the Lord their God. 17 He will go forth before the Lord, equipped with the spirit and power of Elijah. He will turn the hearts of fathers[a] back to their children, and he will turn the disobedient to righteous patterns of thinking. He will make ready a people prepared for the Lord.” 18 Zechariah said to the angel, “How can I be sure of this? My wife and I are very old.” 19 The angel replied, “I am Gabriel. I stand in God’s presence. I was sent to speak to you and to bring this good news to you.  20 Know this: What I have spoken will come true at the proper time. But because you didn’t believe, you will remain silent, unable to speak until the day when these things happen.” 21 Meanwhile, the people were waiting for Zechariah, and they wondered why he was in the sanctuary for such a long time. 22 When he came out, he was unable to speak to them. They realized he had seen a vision in the temple, for he gestured to them and couldn’t speak. 23 When he completed the days of his priestly service, he returned home. 24 Afterward, his wife Elizabeth became pregnant. 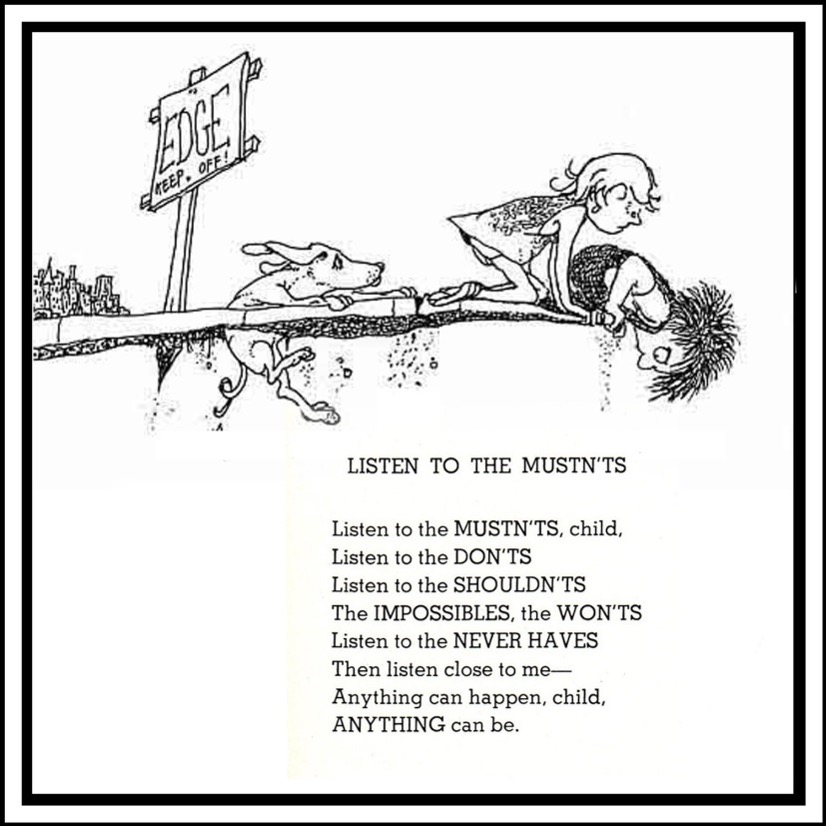 Shel Silverstein wrote that poem that is so applicable to Advent.  In Advent, we’ve hear the story of Zechariah and Elizabeth echoing other Biblical patterns: Sarah and Abraham, Rebekah and Isaac, Hannah –stories that wrongly connected struggles with fertility with God’s blessings, or better said, that God had some control over women’s bodies.  It’s not true, no matter what Texas believes.  These days science helps our understanding of the mystery of pregnancy, but speaking first hand, when we experience one miscarriage after another, it’s not exact.  There’s a lot of prayer, heartbreak, and despair.  And sometimes no answer comes like that of the miraculous angel and the promises of God.  This is where we first meet Zechariah.

Listening deep to the impossibles, won’ts, and never haves, Zechariah assumes what to expect of a God who has only disappointed him.  Even though they were both righteous before God, blameless in their observance of all the Lord’s commandments and regulations (Luke 1:6), Zechariah went about his routines wondering if he believed anymore.  He no longer felt excitement to go into the Lord’s sanctuary and burn incense.  Worship became strange to him.  He had lost hope.  He’s not even sure when it happened, but he awoke one day and like a candle, it had gone out in the night.  He went through the motions hoping his friends wouldn’t notice.  He was faithful even though he felt empty inside.  And there’s nothing wrong with that.  Advent reminds us that we all go through periods of our lives that God seems distant, when we no longer have the strength to do anything more than the bare minimum, when only God can restore our hope.

[a]n angel from the Lord appeared to [Zechariah], standing to the right of the altar of incense.  When Zechariah saw the angel, he was startled and overcome with fear.  The angel said, “Don’t be afraid, Zechariah. Your prayers have been heard. Your wife Elizabeth will give birth to your son and you must name him John…18 Zechariah said to the angel, “How can I be sure of this? My wife and I are very old.” (Luke 1:11-12, 18)

Zechariah listened deep to the impossibles, won’ts, and never haves that not even an angel can restore his hope.  While this might seem hearbreaking, it bears the powerful throughline of every story in the Bible: faith is a choice.  God’s gift of free will[1] ensures we have the choice to believe.  We have the choice to respond to White Gift Sundays, or Stewardship Letters, or Toonie Campaigns. We have the choice to hear these stories and imagine ourselves as Zechariah.  Or not.  Free will, like hope, is both blessing and curse.  I realized long ago that no matter how eloquent the sermon, I can’t convince you of anything.  Not even an angel can convince Zechariah of God’s presence – so what chance do I have – if you don’t want to believe, you won’t.

The angel, and God too knew this, but then again God doesn’t require our belief to make something happen.  It happens anyway.  The story goes on whether Zechariah wants to play a part or not, though saying that, God doesn’t give up on Zechariah.  Instead, Gabriel says,

But because you didn’t believe, you will remain silent, unable to speak until the day when these things happen. (Luke 1:11-12, 18)

This might seem like a punishment for unbelief, but I’d rather look at it as the break in routine that Zechariah needed to listen to his heart.[2]  The silence forced Zechariah to consider the despair he’d chosen to ignore, the routines that had lost their meaning, the loss of his hope.  The divine “time out” given to Zechariah encourages him once more to hear the voice of God saying, Listen close to me…Anything can happen, child, anything can be.

May God speak those words into your heart.  We must confront the fears growing in us as cases go up.  We must address the routines like the Hanging of the Greens, to rediscover what these symbols actually mean for us today.  And most importantly, we must rekindle the hope within us, because it’s the most powerful act of faith we have.

To hear God speaking those words and believe them, fuels the fire of faith within us.  We believe that God works with and through us to bring about new life.  We begin this journey of believe, this journey of Advent hope because our current reality, our current struggles – these may convince us to despair.  Instead, just like the cross of Jesus, God’s loving action can redeem even the most heartbreaking times of our lives.

In this second pandemic Christmas, hope reminds us that just a year ago we were all separate.  Remembering that, we discover that the flame of hope still burns within us for the time that will come when covid is a distant memory.  For hope is more than our past, present and future held together for perspective – hope is the ongoing advent of God.  Hope is the promise that the story continues with us.  Hope is the reassurance that God believes there’s more for you and I. Hope speaks to our human pessimism and fears to teach us that the beginning has (alrady) been quietly forming.  And so as we walk forward by faith, believing that God continues to act in and through us, may this prayer speak to the anythings (that are) already happening inside you.

In out-of-the-way places of the heart,
Where your thoughts never think to wander,
This beginning has been quietly forming,
Waiting until you were ready to emerge.

For a long time it has watched your desire,
Feeling the emptiness growing inside you,
Noticing how you willed yourself on,
Still unable to leave what you had outgrown.

It watched you play with the seduction of safety
And the gray promises that sameness whispered,
Heard the waves of turmoil rise and relent,
Wondered would you always live like this.

Then the delight, when your courage kindled,
And out you stepped onto new ground,
Your eyes young again with energy and dream,
A path of plenitude opening before you.

Though your destination is not yet clear
You can trust the promise of this opening;
Unfurl yourself into the grace of beginning
That is at one with your life’s desire.

Awaken your spirit to adventure;
Hold nothing back, learn to find ease in risk;
Soon you will home in a new rhythm,
For your soul senses the world that awaits you.

John O’Donohue, “For a New Beginning” To Bless the Space Between Us

[1] There’s plenty of research these days debating whether or not we truly have free will (based on genetics, gut bacteria etc)